A few weeks ago I was invited to discover the Belgian area of Kempen. It is a region in the north east of Belgium and partly in Holland in the province of Noord-Brabant.

The Flemish Kempenland occupies most of the province of Antwerp, the north and center of Belgian Limburg and the far north of Flemish Brabant. The characteristic feature of the Kempen is their sandy soil, so it is covered with heathland, oak forests, fens and peatlands. We stayed in the town called Turnhout, where we stayed in the nice hotel of Corsendonk Viane. It was only a 2 hour drive from Amsterdam to arrive there, luckily we brought our bikes with us, because it was too hot to wander. (25 degrees in April!) After a short lunch and some great information from the local tourist office (VVV) we decided to follow ‘Bels Lijntje’, one of the many bike routes in the region. 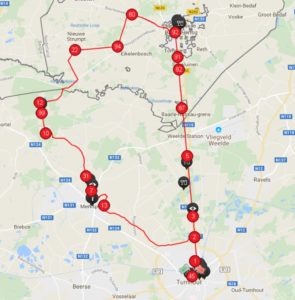 Bels Lijntje, the former railway between Tilburg (NL) and Turnhout (BE) now serves as a cycle path. On the bike we noticed that the border between Tilburg and Turnhout is actually one vast, contiguous nature reserve: the Kempen. Outside a few places, you hardly encounter any buildings, only here and there a small farm tucked away in th

e green or some great villas. The construction of the Bels Lijntje has had a lot of feet in the earth. For a long time a cross-border line was inconceivable. After the separation of Belgium in 1830, both countries lived on the basis of war. It was not until the middle of the nineteenth century that the opening of the railway wa

s a fact. Expectations about the Turnhout-Tilburg line were high, but the journey was never really successful. So they turned it into a cycling path which starts in Baarle-Nassau, but we started from Turnhout with its nice market, nice monuments like the castle of the Dukes of Brabant and of course the town square where you can eat and drink in- or outside many taverns.

The first part of the route was a straight line (the old railway) to Baarle Hertog/Nassau, the most remarkable village in the world! It exists of 30 parts

of Belgium and the Netherlands which, interwoven, form the village of Baarle. In Baarle, the border runs criss-cross through roads, houses and gardens. In the city center, the enclave borders are made visible everywhere with the aid of special paving stones and small aluminum plates in the road surface.

This way you can see exactly where the border is. On the cycling path this has been done with white crosses on the tarmac and signs telling you when you enter or leave a country. We have never seen such a village in our lives. After spending some time here we went back, not following the official route, but through the network of crossin 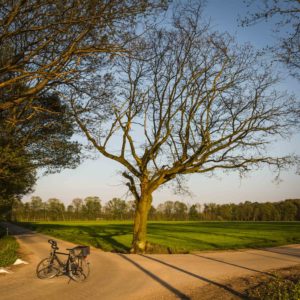 g points. This way you can follow routes like ‘Bels Lijntje’, but also you have the possibility to create your own. At every crossing point you will find a panel explaining where you are and of course where you can go with a map of the area. The same goes for the vast number of hiking trails. You cannot get lost, because you  will see a small sign on almost every square kilometer in the area. We got back passed the village of Merkspla 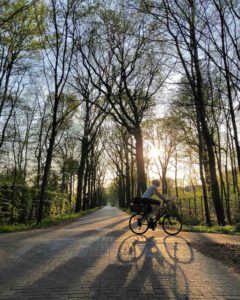 s and arrived at Turnhout at eight. Just in time to order a nice meal on the town square at Brasserie Terminus, where they serve a specialty called ‘Steppengras’, long thin fried potatoes which looks like spaghetti on a huge plate (too much for us :). So we ordered the scampi’s and the steak with Belgian beer (they are famous for their great beers!), it was delicious!

The next day we took another route, the  ‘landlopers route’ with the former vagrants colonies in Wortel and Merksplas  it offers a fascinating mix of nature, heritage and stories. This route makes a green loop along the four prisons of the North Kempen region. 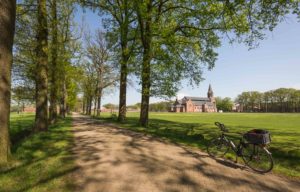 Rijkevorsel-Achtel, the Sint-Catharina churh, the beguinage and the town hall of Hoogstraten, are also very beautiful. We had the luck to be there on the start of the tourist season, so there w

ere all kinds of gatherings, like a small fair in the Begijnhof with a market of natural products. We had an ice cream made of sheep milk. We continued our way to Hoogstraten and passed two mills, the second one was a water mill with all kinds of things to eat and drink, it was perfect with the sun and Summer temperatures in April! As we continued we passed by

the National Penal Administration of Merksplas, with its prison buildings, beautiful chapel and farmstead, beautiful driveways and vagrants’ cemetery. An obligatory stop on the route, if you ask me. Just like the former Charity Colony of Wortel, both are in a lush green setting. 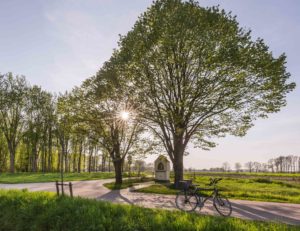 All in all a perfect weekend, with perfect routes, we did not get lost ones, because of the signs everywhere and because of the beautiful weather. If you like touring on your bike in a quiet, nice changing nature landscape, go to the Kempen and you will not be disappointed.

For more information you can go to https://www.kempen.be/